Sometimes it’s dangerous to drive while drinking or drugged and sometimes it’s perfectly safe. It’s vital to learn where the line is in terms of driving safely.

As one of the top drug enforcement officers in the US, I was also a member of a DUI task force for over a year and made hundreds of DUI arrests. I had extensive training in the field of DUI interdiction and became an expert on determining whether a person was safe to drive or not.

I never had an accident while driving stoned but had three while completely sober. My experience in law enforcement revealed that alcohol and prescription medications were detrimental to a person’s ability to drive safely. Far more than marijuana, cocaine, or amphetamines.

Although I have not driven in over six years (by choice,) I was always stoned when I did. I discovered cannabis made me more aware of the dangers of driving which caused me to reduce my speed and drive more cautiously.

Comparatively, I have driven drunk on dozens of occasions and still feel bad about it. I could not execute safe driving behaviors while under the influence of alcohol. I was putting myself and others at risk.

Is it safe or not?

To drive or not to drive

Law enforcement and politicians in the US want citizens to believe that driving under the influence of drugs is dangerous and morally reprehensible.

Not understanding the effects of various drugs and the exposure to biased advertising campaigns created a culture of fear and judgment. These irrational emotional ideologies contribute to increasingly illogical laws and punishments for drugged driving.

The line between safe and unsafe driving is determined by IMPAIRMENT. It is not determined by the substance ingested or the amount. Using instruments to determine the level of alcohol or drugs in a person’s body is not a fair test of impairment.

Why blood alcohol tests are not correct

Have you noticed the 50-year-old man who can drink all day and never wobble? His blood alcohol levels may be far beyond the legal limits but he can pass all three tests mentioned below. This person does not deserve to be arrested because he is not IMPAIRED.

In contrast, have you ever noticed a wobbly and slurring young person who only drank two beers? This person’s blood alcohol levels may be within legal limits but he/she has no business driving because he/she is IMPAIRED.

Likewise, it’s injudicious to arrest a person based solely on the amount of THC in their blood. The high-inducing Tetrahydrocannabinol (THC) can remain in the blood for 30 days from the time a person last smoked marijuana. This means cops arrest totally sober drivers each day for being high a month earlier.

In a study titled, “An Evaluation of Data from Drivers Arrested for Driving Under the Influence in Relation to Per Se Limits for Cannabis,” the AAA Foundation for Traffic Safety (2016) also concluded that

“a quantitative threshold [to determine impairment] for per se laws for THC following cannabis use cannot be scientifically supported” based on the inconsistencies observed among those with similar THC blood levels.

As a cop, I never charged a person I arrested for marijuana possession for drugged driving. I tested hundreds of people under the influence of marijuana and they always passed the field sobriety tests I explain below. 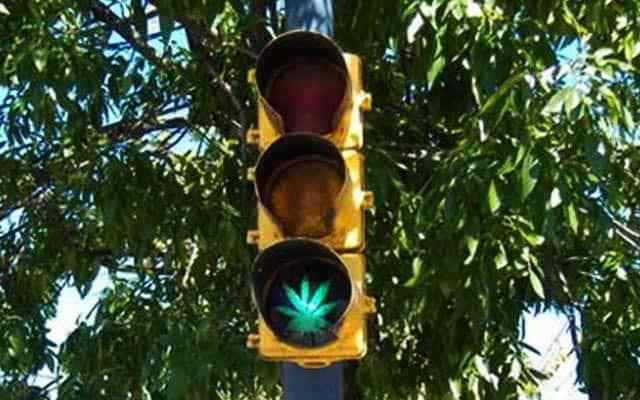 Since leaving the force and becoming a cannabis user, I have tested dozens of pot smokers and determined it was not safe for several of them to drive.

The people I found unfit to operate a vehicle on marijuana were always “rookies” or new smokers. They lacked experience being high so and it was hard for them to adjust properly. Therefore, they were IMPAIRED.

Every person has a unique response to the substances and quantities they ingest.

The training I received as a law enforcement officer taught me how to determine if a driver was impaired. I am going to teach you the same thing. I am 100% confident that if a person does not have a handicap, impairment can be determined by these three tests. It is unsafe for you or another person to drive if you or they fail these tests.

Roadside tests and how to pass them

I’ve trained and advised my kids and friends to test themselves before leaving a party. If they can’t pass, they simply wait an hour and test again. Additionally, it’s important to learn how to determine whether it is safe for you to drive. This will empower you to be a person of good character who does not cause harm to others. The tests are as follows:

This is the test where the officer has the suspect follow a pen with his/her eyes. The word “nystagmus” means “the involuntary jerking of the eyeballs.” Sober persons have nystagmus but it’s undetectable to the naked eye.

Inebriations, especially with alcohol, make the jerking visible to the tester. The next time you are around a drunk friend, have them keep their head still and act as if they are trying to look at their ear. You will see their eyeball jerking around. The drunker they are, the more it jumps.

2. The One Leg Stand Test

This test involves asking the motorist to stand on one leg while staring at his or her toe for 30 seconds. If the suspect places his or her foot down more than twice, it’s a good indicator of intoxication.

The suspect is asked to take nine heel-to-toe steps while counting the steps and walking a straight line. Then they are required to turn around and walk back in the same manner.

This test is graded on how well the motorist follows instructions and if he or she can walk a straight line. For instance, if a person counts 15 steps one way and 10 steps back it is probably unsafe for the person to drive.

Regardless of the legal consequences, it’s important to not kill or seriously injure another person. Testing yourself is the best way to be responsible. As discussed throughout this article, you may pass the tests but according to irrational laws, you may still go to jail.