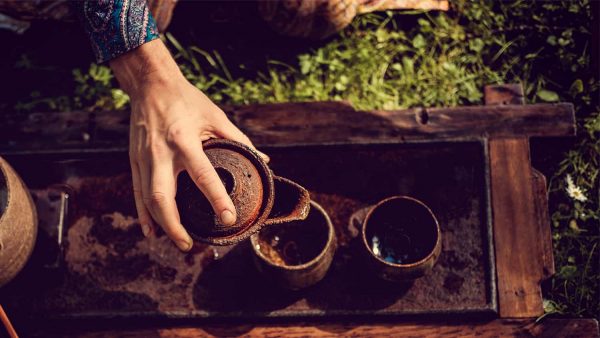 Traditional Ayahuasca ceremonies have a strong culture and set of customs that are centered around taboos, superstition and fearful philosophies of demonic retaliation. A new and non-traditional philosophy of “Self Shamaning” is emphasized in “The Barry Cooper’s Scientific School of Ayahuasca/Ibogaine.”

This brand new and controversial philosophy was developed and advanced by TripToWellness collaborators and Barry Cooper. The medicinal and “spiritual” effects of the Ayahuasca are derived from the wonders of the medicine and not supernatural powers, bizarre rituals or the witch doctors that provide the plant extract.

The objective of the Barry Cooper Scientific School of Ayahuasca and Ibogaine is to usher the medicinal DMT plant out of the secluded jungles of South America and into the mainstream. This paradigm changing philosophy has been fashioned to help all of humanity become the best version of themselves possible.

The real “magic” is a chemical compound called dimethyltryptamine (DMT) that comes from the extract of a plant called Mimosa Tenuiflora. The active ingredient in the extract is DMT. DMT is going to take you on a journey of self discovery with or without the sacred context the Ayahuasca brew is typically consumed in.

All of these extras are part of the history and landscape from which the plant and vine is harvested. They add tradition and nostalgia and although they deserve our deep respect and acknowledgement, they are not necessary for the DMT to provide a life transformative experience.

Persons claiming to have special favor and access to the spirit world created the source of these flawed, inaccurate and sometimes dangerous formalities. These persons are often referred to as shamans, priests, medicine men, sorcerers, and witch doctors.

That stated, it’s important, imperative, fair and essential to acknowledge there are many “shamans” who deliver Ayahuasca properly and their techniques have healed thousands of people throughout the ages. The TripToWellness philosophy is not the only safe and effective way to benefit from the DMT brew.

The self-shamaning school of thought is an absolutely necessary divergence from the traditional approach to the ayahuasca experience. While travelling to the jungles of Peru to have your experience mediated by a “chanting , leaf shaking shaman” can be a thrilling adventure, you can have just as transformative of an experience outside of that setting.

While this may sound like heresy to those who romanticize the ayahuasca experience, let’s consider this fact: Magic mushrooms have also historically been used in a sacred context. However, no one scoffs at the idea of using that psychedelic fungus without reproducing an ancient mexican ritual. Nor is it deemed necessary, by popular opinion, to have someone else administer the mushrooms after you have become acquainted with the experience.

To be clear, it is generally a good idea when consuming ANY psychedelic to have someone present or within easy contact that knows what you’re doing and to keep an ear out for you. That said, the belief that this person must come from a lineage of ayahuasca experts and must sings songs and blow smoke is more dogma than necessity.

Many organized religions, including Catholicism and Christianity, have gone through phases where the average man was forbidden from reading the sacred text themselves. It was claimed the only true way to gain the pure wisdom contained in the texts was through the ordained clergy.

Much in the same way, the ayahuasca experience is being claimed by some who see themselves as the ordained clergy of “mother ayahuasca.” Their insistence that ayahuasca must only be done their way represents a bottleneck to the widespread acceptance and use of ayahuasca.

If we hope for as many people as possible to find healing with these remarkable plants, our culture and our community has to be open to new approaches.

TripToWellness welcomes you to our exemplar metamorphosis from aged and flawed to contemporary and proper.

Contributing authors to this article: Erika Harris and L Dixon

Barry Cooper Shows How To Smoke Weed In public and NeverGetBusted

Why Ayahuasca Purging Vomiting And Diarrhea Is Unnecessary